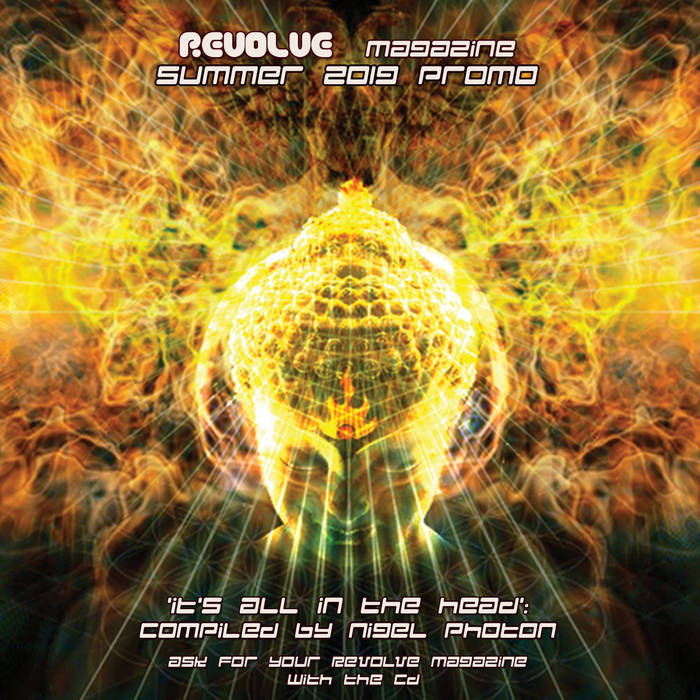 This year's Summer Revolve CD compiled by Revolve Magazine's editor DJ Nigel Photon returns after a gap of six years but with the same concept at its heart; to present some of the best night-time Hard Psychedelic Trance music taking you on a journey from early evening through the night to twilight sounds and then back through to the light of the morning. Myst, a great artist from Russia who has been making music almost for two decades starts with his track 'Candyflip'. (How I used to love to take my acid, a pill first, then drop a tab, to 'candyflip' it). This track from its positive sample onwards pursues the same path to energetic and beautiful heights. Then to Project Ozma, a new act I've established with the talented Chaosoma. The track called 'On One' with its humorous samples and powerful energy is a tribute to the Acid House scene filled with acid 303 and other synthesised sounds. It leads perfectly to Mutaliens who wants to modulate your mind with his Looney Moon-type night-time deep squelches; then through to Warp Engine on Purple Hexagon Records and then Greece's Black Noise. Once making music for TIP he's now got all deep, serious and sonically challenging with his Sangoma label sound. This track mastered by Ady Scorb originally so you should know what to expect sound-wise. Then comes the transition from night to day with Kala & Psilocybin's epic and amazing tune. It's a 'Playful Universe'! Lucid Mantra grounds you with his 'Root Therapy', the artist with a studio in the Himalayas provides us with the perfect combination of sitar, and morning tones. Mandala's use of different FX, clever use of samples, design, power and awesome melodies takes you up an unexpected trail. A huge track. And then the CD and morning finishes with a strong hit of 'Tryptamine' from Otherworld which sort of mirrors the whole focus of the 2019 Revolve Magazine - bringing back the original spirit. Wow! I love this track; interesting FX, what a groove, what samples - a fantastic journey. It it is time for psychedelics to be re-evaluated for their use in treating disorders of the mind. I hope you enjoy this and please 'LIKE' and download the Revolve PDF at www.facebook.com/revolvemagazineUK as well!!!

This issue of the magazine continues the journey and story of the rebirth of psychedelic culture in the West as told in 2017's 50th anniversary of the First Summer of Love, 2018's 30th anniversary of the Second Summer of Love and now this issue the 25th anniversary of when the music of Goa Trance came back to be released and played all over Europe including at the first Antaris Festival. Interviews with as many of the original pioneers as could be contacted or fitted in. Astral Projection, Dino Psaras, Dragonfly's Youth, Etnica, Koxbox, Man With No Name, X-Dream, Solipse 20th anniversary story by yours truly, memorials to Ralph Metzner once of the 60's pioneers, Dennis Hux Flux, Finbar Occular, and Bruno Module Virus. 70th anniversary feature of the invasion of Tibet by China and the 60th anniversary of the uprising to protect the Dalai Lama against the Chinese. Also let's please give some money to help a charity helping stray animals in Goa.
A preview of some of this Summer's festivals.
Give it a try you might just love it. :-)

Bandcamp Daily  your guide to the world of Bandcamp

outré black metal, with a Victory Over the Sun interview and music from Liturgy and Jute Gyte.